Skip to content
You are here: >> WillsHub-BHS Legal Home >> Articles on succession and inheritance law in Australia >> Leaving an unsigned will – second thoughts or intended last words? 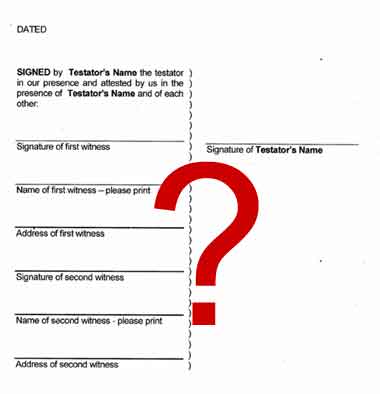 Sometimes an unsigned will is left in situations where the willmaker, in consultation with lawyers, has been in the process of making a new will, but died before the requirements to make a valid legal document were completed.

Leaving such a testamentary document raises important questions. Did the deceased approve of the contents of what is a draft will, and so intended it to be their last will –  but simply didn’t get around to executing it according to the legal formalities? Or were they unsure and wanted alterations?  Can an unsigned will, that is an unexecuted will, or informal will, as lawyers often call them, even be admitted to probate by the Court? The Court’s dispensing powers are discretionary – it depends on the circumstances in each case.

Executors, as those responsible for managing and finalising the deceased person’s estate, need official evidence of their authority to deal with it.  To obtain this official evidence application needs to be made to the Supreme Court for a legal document – a grant of probate.  A valid will is required to be attached to the application.

An unsigned will or informal will does not comply with the legal requirements for a valid will.  This means that special application needs to be made to the Court as to whether the document could be admitted to probate.  The application is made under special provisions in succession legislation which gives the Court power to dispense with the formal requirements for signing a will.

These provisions are known a the ‘dispensing provisions‘ and most Australian states and territories wills and succession legislation have similar provisions giving the respective courts power to dispense with the legal requirements under statute to make a valid will.

Unsigned will or informal will – can it be admitted to probate? It depends.

Exercise of the Court’s power to dispense with the legal requirements for a valid will is discretionary, depending on the circumstances and facts of each case.

Unsigned will, informal will not admitted to probate

Recently the West Australian Supreme Court had to decide whether an unsigned will, an informal will, should be admitted to probate under the law.  The law is section 32 of the Wills Act 1970 (WA) see below.  In this case the Court refused the application, finding that the unsigned will did not intend to make a will in the terms of this particular document.

The Court said the deceased used what seemed to be a series of excuses not to execute her will suggesting she was not settled in her intentions, when there had been opportunities to do so.  The circumstances, the Court said, spoke of a person unwilling to commit herself to the terms of a particular will, that she had time and opportunity to do so, that from the evidence, it showed she had not settled on a particular testamentary intent.

In reviewing the relevant legal authorities the Court distilled and summarised three questions laid down by those precedent decisions on such circumstances as follows:

The Court found that in the circumstances of this case the first two requirements were satisfied.  There was a document.  Secondly this document purported to embody the testamentary intentions of the deceased.

However the third requirement was not satisfied because the Court concluded the evidence had not established that the deceased demonstrated an intention that the document in question was intended to be in effect their will.

Dispensing provisions under the law in Western Australia

In Western Australia, the Supreme Court may dispense with the formal requirements to make a valid will: section 32 of the Wills Act 1970 (WA). Section 32 states in part:

(2)         A document purporting to embody the testamentary intentions of a deceased person, even though it has not been executed in the manner required by this Act, constitutes —

(3)    In forming its view, the Supreme Court may have regard (in addition to the document) to any evidence relating to the manner of execution or testamentary intentions of the person, including evidence (whether admissible before the commencement of this section or otherwise) of statements made by the person.

Complying with the legal requirements to make a valid will should always be a priority, where at all possible.  Legal proceedings to resolve problems only serve to cause delay and deplete the estate from extra costs, anxiety and stress for loved ones.