Skip to content
You are here: >> WillsHub-BHS Legal Home >> Articles on succession and inheritance law in Australia >> Unknown beneficiaries - when potential heirs cannot be found

Not everyone lives and works in the community in which they grew up, surrounded by family and friends.

Many leave to pursue opportunities elsewhere, maybe never to return.  Family ties may weaken in time, and contact is lost. What if you want to leave them something in your will?

In one case1 an overseas-born deceased had been residing in Australia only a few years.  In his will he left half of his estate to a named person, the executor, and the other half to “my remaining relatives”.

This seems straightforward you might think, but it was over five years post death before administration of the estate could be finalised, following the executor’s application to the court for advice and direction on what to do.

The source of several problems said the court were the words “my remaining relatives”.  One problem was construction of its meaning in the will; there being a large body of law on such matters.  Another was determining who were the “remaining relatives”, and then how should the gift be divided among them – in absolute amounts or as a proportion, per capita (by the head) or per stirpes (by the stocks)?

The executor was a financial adviser to the deceased and unrelated. The deceased had never married, had no children, and both parents had pre-deceased him. To locate any siblings and other living relatives who would fall into the class of “remaining relatives” the executor made searches, inquiries and investigations overseas over a long period.
It was found that the deceased had two sisters, but both had predeceased him. Both had married and had children. The offspring of one sister could not be found. Of the other sister’s family, only one son and one grandson were living.

In other words “remaining relatives” amounted to the living nephew and great-nephew and possibly any living offspring or issue (see box below as to meaning of “issue”) of the other sister, but none of these could be found.

From the legal authorities, the court said that the half share of the estate given to a class of people identified in the will as  “my remaining relatives” would be distributed among them in equal proportions. That is, each relative alive at the deceased’s death would take per capita (see box below).  Two living relatives had been identified – the son and grandson of one deceased sister.

But the problem was, as the court said, it had not been established for certain, how many were in the class, (the offspring of the other sister having been found).  So how to determine what share could the two living identified relatives take?

The courts have overcome this problem by making a special type of order for when beneficiaries cannot be located nor identified but come within the class to take, in order for estate assets to be distributed and finalised.  It is called a  Benjamin order2, after the decision in an English case in 1902 in which a similar problem arose. Basically it means that when there is uncertainty about distributing the estate; and extensive but inconclusive inquiries have been made, the court can make an order permitting the executor to go ahead and distribute, and so complete the administration.  What happened in the foregoing case is well summarised in a judgment from a Victorian Supreme Court decision3 where the Court said:

“44   A Benjamin order takes its name from the decision in Re Benjamin; Neville v Benjamin. In that case, following enquiries made to ascertain his whereabouts, Philip David Benjamin was presumed dead, with the result that the benefits accruing to him under the deceased’s estate were redistributed to the other beneficiaries. Thus, where it is uncertain that a beneficiary to a deceased estate is alive, or available, then a court can order that the benefits accruing to that individual under the estate be distributed amongst the other beneficiaries. Such an order is made in the absence of any evidence that the missing beneficiary survived the testator and protects an executor in the event that the date of the missing beneficiary’s death is later determined and it is found that the estate has been distributed incorrectly.”

The executor is protected from liability to anyone who subsequently appears. If they are eventually located or identified, they can make a claim and be entitled to trace the funds distributed to those already identified.  This is because the order does not affect the legal rights of anyone who would be entitled but cannot be found at the time it is made.

The Benjamin order principle is resorted to in difficult situations to overcome practical problems and provide convenience in administration.  There have been over 30 cases across Australian Supreme Courts where a Benjamin order has been made from 2000 to writing this update (August 2018).

The decision
The Court decided in this case, that in the circumstances, a Benjamin type order be made where the half share of the estate given to “my remaining relatives” was to be distributed between the son and grandson of the deceased sister in equal proportions.  But without prejudice to any offspring of the other sister in case they were ever identified and located, so that they could claim a share of the estate, by tracing the distributed assets.

International genealogy research firms can assist with locating missing beneficiaries (heirs), unknown potential family members who may be entitled to inherit the deceased’s property, in other countries.  Finders International is one such firm in the United Kingdom offering a range of genealogy, family tree, and probate research services in England, Scotland, Ireland and elsewhere, contact them here or to find out what they can do visit https://www.findersinternational.co.uk/.

The graphic below demonstrates a per capita based distribution.  The five living offspring are entitled to take the same proportion being one fifth. 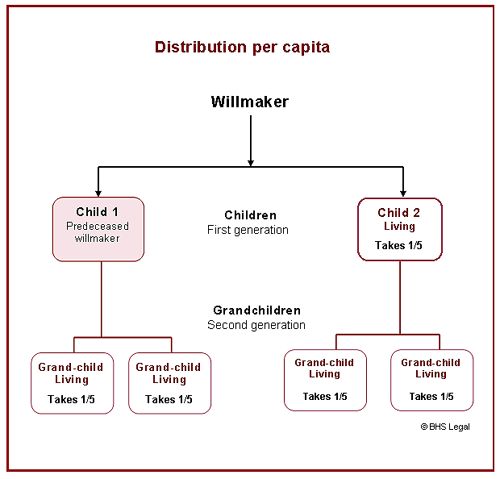