Skip to content
You are here: >> WillsHub-BHS Legal Home >> Articles on succession and inheritance law in Australia >> Signing and execution of a will – same thing?

Signing a document is not the same thing as having to execute it.  We might talk about signing a will but technically, a will is required by law to be executed.  So what does execution mean?

Execution of a document means to do all what the law requires to be done so as to give the document legal effect, to give it validity.1

What are the legal requirements for executing a will?

The legal requirements for executing a will, known as the formalities, are set out in the wills and succession legislation in all states and territories. Links to the relevant sections of the state/territory statutes are shown below.  While there may be some differences,  generally the requirements to be complied with for executing a will are that:

The links below are to the statutory requirements in each state and territory for executing a will:

There are other aspects to a will’s validity – read more on making a will and the requirements for validity here.

What happens if a will has not been executed properly?

The Court has a dispensing power
Not necessarily.  Succession and wills legislation now gives the Supreme Court in most states and territories a special power to dispense with the legal requirements for executing a will in cases where the Court is satisfied that the willmaker intended a document to be their will; and admit that document to probate, even though it was not executed in the manner required by law.

An application under these dispensing provisions means that evidence will need to be submitted to the Court along the lines of any statements of the deceased about their will, their testamentary intentions, the way in which the document was signed, when, and where, who were the witnesses, and statements from the witnesses as to what happened.  It will depend on what the particular problem is and the circumstances, every situation being different.  Assistance and advice should be sought from a legal practitioner practicing in this area.  Lawyers may be found through the relevant law societies here.

How to ensure a will has been executed properly?

Generally execution of the will is overseen by the drafting solicitor in their offices.   However this may not always be convenient.  For those who arrange for execution outside their lawyer’s office, it is worth taking the time to have a legal practitioner check it, once executed, just to be sure everything is in order.  Fixing up any deficiencies, however small, down the track, can be far more expensive, time consuming and stressful. 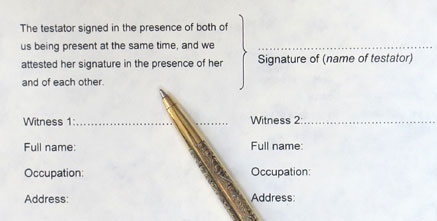