Skip to content
You are here: >> WillsHub-BHS Legal Home >> Articles on succession and inheritance law in Australia >> Severing a joint tenancy unilaterally 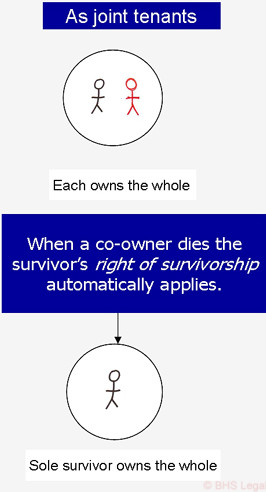 The right of survivorship means that when the first owner dies, their interest in the property is automatically absorbed so that the surviving owner now owns the whole property, see graphic. This is due to the operation of law and is independent of a will.

When the survivor dies, the property then passes according to their will, or if no will left, according to the intestacy rules. For people co-owning property as joint tenants, it is therefore important to review their situations and wills on a regular basis to ensure outcomes on death are what is wanted.

Sometimes a joint tenancy over a property may need to be severed, that is divided or broken into parts, for some reason such as when a couple divorce for example.  The consent of the other person is not necessary, but not consulting the other may only lead to other trouble. Notifying mortgagees and the like is a different matter. Legal advice should be sought.  The process to sever a joint tenancy is governed by state property legislation and administered by the Land Titles Office.

In a case in New South Wales1 the deceased and her partner had owned their residence of many years  as joint tenants.  On purchasing the property one of them paid a substantial deposit borrowing by a mortgage to meet the balance.  The mortgage was paid off shortly afterwards with funds from his father.  The title deeds, certificate of title, definition here, were then kept at home in a safe.

Some fourteen years later, for reasons unknown, the deceased unilaterally severed the joint tenancy without telling her partner so that she owned the whole property.  She actively sought to conceal it, including asking her daughter to do so, as evidence before the Court showed.  Following her mother’s death, the daughter then informed the surviving partner of what had happened.  The deceased had left a will leaving her whole estate to her only child and daughter, which resulted in the daughter inheriting the property.

The daughter and surviving partner approached the Court to make certain declarations by consent. However, even though parties may have reached agreement as to a way forward to resolve the legal problem, while relevant, as the Court said, it is not determinative on the court making such orders, it is not automatic.  Quoting authority, the Court said it has a very wide discretion to make declaratory orders, it must be exercised in accordance with legal principle and rules, and it may determine that it is inappropriate to make a declaration.

The Court quoted from an earlier case2 citing authorities as to when a court may or may not make declarations by consent:

The Court concluded from the evidence that the deceased had unilaterally severed the joint tenancy without notice to her partner and actively concealed that severance from him. Her conduct constituted fraud for the purposes of the Real Property Act 1900 (NSW). Under this legislation the court has power to set aside a dealing where it is of the opinion that the circumstances require it.

The court was satisfied that it was both appropriate and justified to make the orders and declarations sought, among them an order that the transfer unilaterally severing the joint tenancy be set aside.