Please note: if you have landed here looking to contact the Court please see Court Locations and Contacts of the Magistrate Court of Western Australia page here.

The Northam Courthouse is an operating Magistrates Court serving the agricultural community of Northam, west of Perth in Western Australia.

Northam is located on the main route to the gold fields around Kalgoorlie further west.

In 1893 Paddy Hannan made one of the largest discoveries of gold in Kalgoorlie.  So it is not surprising that considerable development of railway connections and infrastructure took place in Northam during the 1890’s. 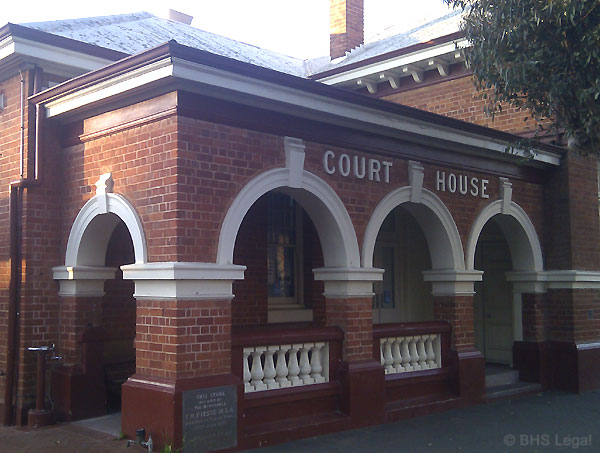 Over the decades, court facilities at Northam have gone through a range of forms and structures.  In 1865 the Perth Gazette and West Australian Times reported that a lock-up with police quarters and court-house were in the course of erection at Northam: 27 October 1865.  Although one year later the Colonial Department reported to the Legislative Assembly that the work remained unfinished.  Carpenter’s work, bricks and timber for lock-up, Police Quarters, court-house and stables, expenses to date being £269 16s 9p: Perth Gazette and West Australian Times, 19 June, 1866.

No doubt many cases of all kinds were dealt with in a rapidly developing agricultural and mining district.  One incident reported in January 1875 was about

“…a disgraceful row [which] took place at Irishtown, near Northam, at the residence of a small farmer named O’Keefe. A case arising out of the occurrence was heard at the Northam Court-house,..when the originators of the disturbance were fined for their offences.” The Western Australian Times, January 1875.

In 1896 the Government accepted a tender for £2,218 from J F Wrigley for construction of a new Courthouse. (Government Gazette, The West Australian, 25 May 1896).

The Foundation Stone was laid on 29 June 1896 and the building completed in 1897, (Northam and Districts Historical Society).

At that time the Court sat for one day every fortnight.  This meant litigants, witnesses, solicitors, barristers, and staff all had to be ready to proceed on the day.  Some travelled considerable distances from remote locations by road and train to have their day in court and naturally adjournments were not always appreciated :The West Australian, 22 September 1906.