Skip to content
You are here: >> WillsHub-BHS Legal Home >> Articles on succession and inheritance law in Australia >> Murrumburrah Courthouse 1880, NSW

The Murrumburrah Courthouse building on the corner of Vernon and Albury Streets, Murrumburrah, was constructed in or around 1879-1880.  It has local heritage significance under Shedule 5 of the Harden Local Environmental Plan 2011.

Murrumburrah is a town adjoining the township of Harden, to the extent that, as a visitor, you really don’t know when you leave one and enter the other.  They are often referred to as “twin towns” and serve a large and diverse agricultural community. Both are on the south west slopes of New South Wales, see a location map below. 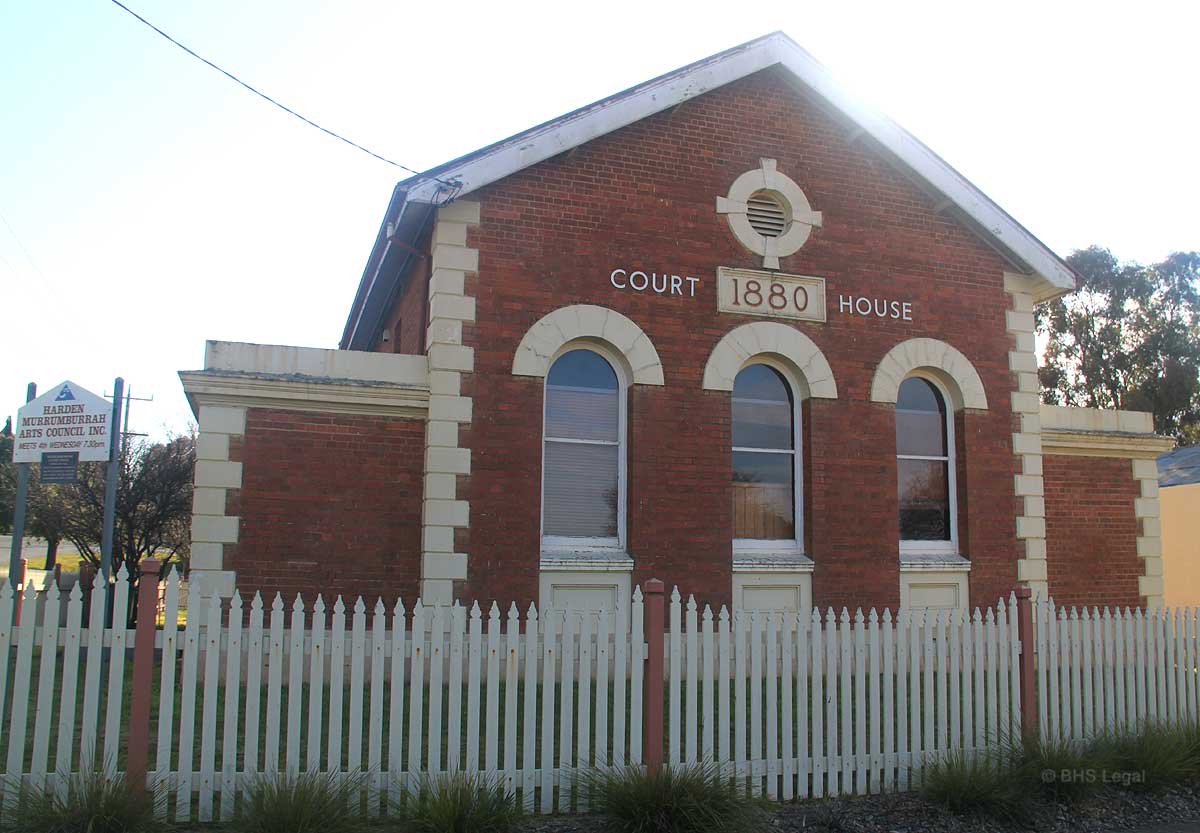 While the Murrumburrah Courthouse is no longer operating as a local court, the building is still in active use by the Harden Murrumburrah Arts Council.  Local Courts are not far away in Young, Cootamundra and Yass. 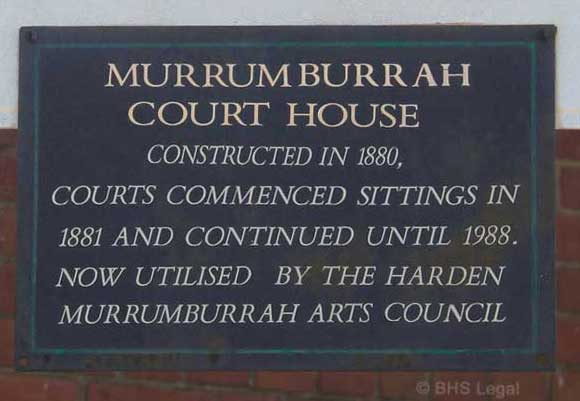 The development of courthouse facilities

In the 1860s there was rapid expansion in many regional areas of New South Wales due to the discovery of gold. Many were attracted to the mining sites in search of a quick fortune. With the increase in population came demand for services as well as the need to maintain law and order, and of course, a place in which to administer the law.

In 1861 the Colonial Architect’s Department had a number of works in progress in the interior.  These were mostly gaols and courthouses.  However for Murrumburrah,the first step was calling tenders for the erection of a watch house.1

The State Records Authority of NSW records the Murrumburrah Court of Petty Sessions as being created on 14 September 1865 by statute: the Offenders Punishment and Justices Summary Jurisdiction Act of 1832.2  It was abolished in 1984 by the Local Courts Act 1982 (NSW).  This legislation replaced all Courts of Petty Sessions in New South Wales with Local Courts.3

In 1879 the Minister for Works requested various departments to “hasten the preparations of plans for public works, for the construction of which Parliament had appropriated funds.” Tenders had been called including for the erection of a court-house at Murrumburrah.4

Construction of the courthouse was completed in 1880, but it seemed it remained unoccupied for a time, drawing some complaint.  The local newspaper opined that although the new courthouse had been finished for two months, there were “..no signs of the powers that be making any use of it, ..or is it that Government is waiting until they can raise enough money for furniture, etc?5

A price for administering justice – passing around a hat

It seemed the reason was a lack of money, the above respondent observing that

“…it has been proposed that we request our worthy C.P.S. to go around with the hat (and a subscription list) to raise sufficient funds; perhaps a concert..might bring in the needful.” 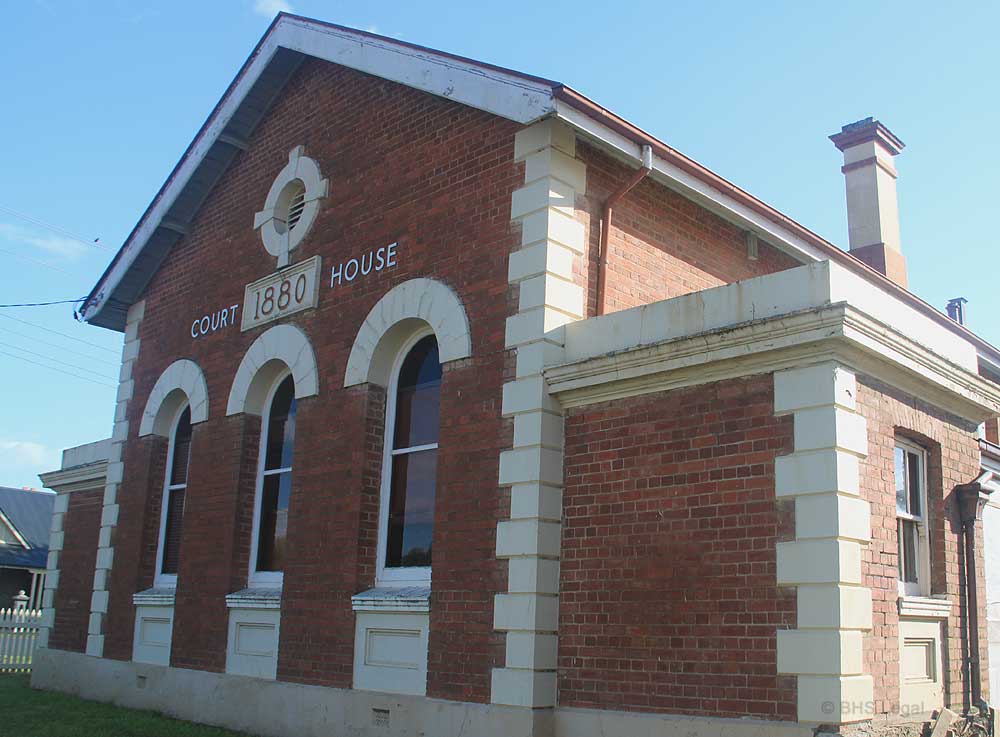 Desire for a District Court

Notwithstanding that the new Courthouse remained unused, the community was ambitious, and a petition, “numerously signed” had been sent to the Government requesting urgently the establishment of a District Court, to serve the large population now in the district.

There was little hesitation in expressing dissatisfaction with the state of the new courthouse. It was thought strange that neither the local member in office, nor his brother, a ‘local man’ to boot, had done anything about the courthouse.

“Here it stands at present a useless building, untenanted, and, as a visitor from Sydney remarked the other day, “This place to let”.5

Finally the Murrumburrah Courthouse was opened on 4 February, 1881.  The police magistrate gave a “happy speech, ..describing the building as one of the best courthouses out of Sydney.”.6 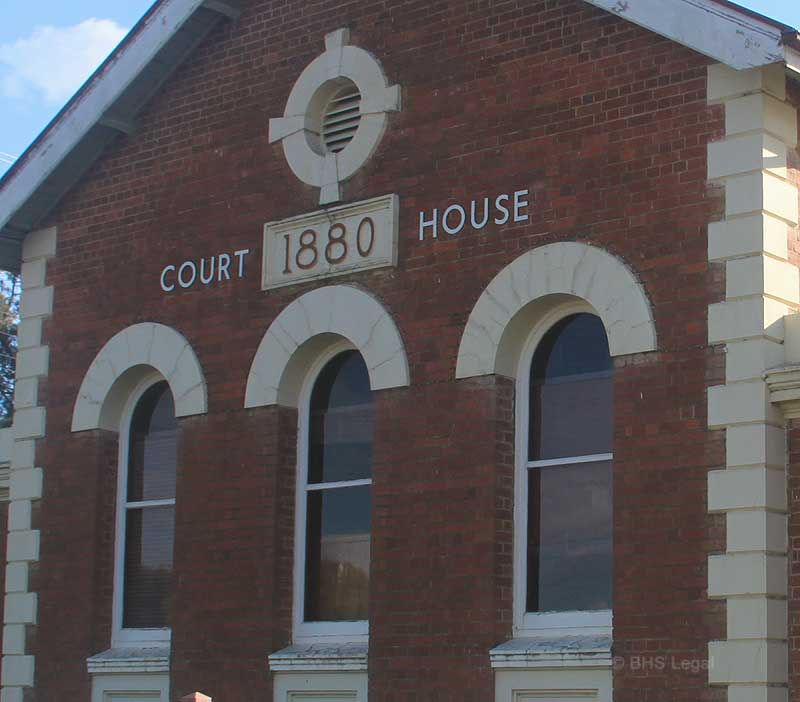 Possibly among the first cases being heard in the building was a committal hearing of two people accused of murder. After a two-day hearing, John and Elizabeth Bradford were committed to trial for the murder of Daniel Bradford.  The courthouse was “crowded to excess”.7  Shortly after another case was an inquest into the death of a newly born male child.  A woman was take into police custody, charged with the child’s murder.8

In the 1860s gold was being discovered in many districts of New South Wales.  Murrumburrah was no different and reportedly had its own ‘rush’.9 Many miners began arriving at the Murrumburrah diggings in 1862 on the basis of extravagant reports. Hundreds were already at an “excellent prospect” near Murrumburrah, and hundreds were arriving. Not surprisingly in such circumstances there were robberies.

In 1862 a man was apprehended at Murrumburrah on the suspicion of highway robbery.  But when the witnesses were called, they said it was not him.  Upon release he inquired as to compensation for the inconvenience he had been put to.  He had been in custody for 17 days as well as taken a long distance out of his way.  The bench replied that there was no provision for compensation in such circumstances; nothing but what was required to further the ends of justice.  The police had only done their duty.10

It is interesting to note that the gold in the area was reportedly of good quality, and not all that difficult to obtain.  For example it was reported that the gold at Murrumburrah and Cunningham Creeks, if worked systematically, would return good profits to the miner.11

Some thirty years later, the prospect of finding a missed nugget still lured some to the area.  In 1898  a man was committed for trial at the Murrumburrah Police Court on a charge of stealing gold from a claim at nearby Cunningham Creek.12

Gold was not the only thing discovered at Cunningham Creek.  The year before, in 1897 bones of extinct Marsupials were found, and reported as “..generally lying immediately above the auriferous wash-dirt of the old subsidiary branches of Cunningham Creek.”  Etheridge, R., 1897. The discovery of bones at Cunningham Creek, near Harden, New South Wales. Records of the Australian Museum 3(1): 9–10. [7January 1897]. 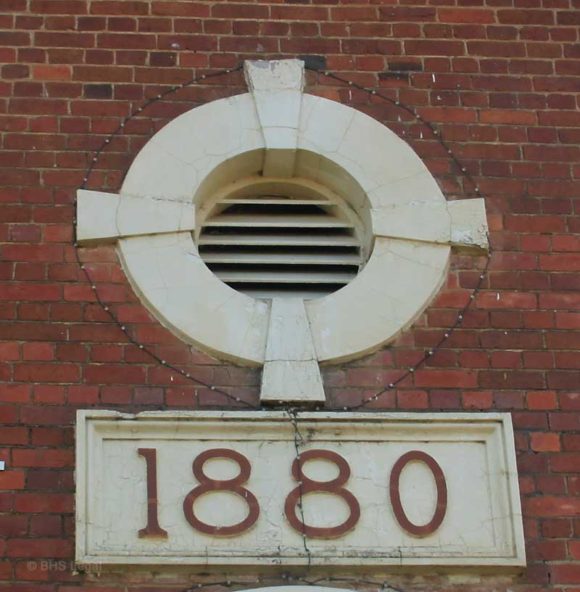 A Royal Commission at the Murrumburrah Courthouse

In considering how to engage returned soldiers from the war, a commission was appointed to inquire into the rural, pastoral, agricultural, fruit-growing and dairying industries.  The Murrumburrah Courthouse was considered a convenient place from which the Commission could take evidence as to options for permanent settlement in country areas after the war.

The public enquiry was to explore ways in which land laws might be altered to foster success in semi-arid to arid areas as well as tenancy, capital requirements, water supply and land use issues. At that time the unimproved value of land was said to be about 6 -7 shillings an acre.13

Finally, to finish off on what the Gundagai Times thought was a “rather tall yarn”. In the mid-summer of 1890, a snake about 4 feet long (1.2 m) was reportedly killed at the entrance to the Courthouse gate. Then some days later, another snake was seen at a local store, climbing the verandah post!  That one was shot by an officer from the telegraph office.14