Skip to content
You are here: >> WillsHub-BHS Legal Home >> Articles on succession and inheritance law in Australia >> The effect of marriage on a previously made will

Marriage in Australia generally cancels an existing will, subject to some exceptions. 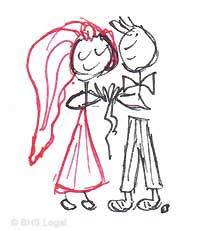 Getting married is an important life event.  There is a lot to organise, in addition to making arrangements for the wedding ceremony itself.

However, if research on will making in Australia is any guide, the making or updating of existing written instructions as to what is to happen on death following changed personal circumstances probably won’t feature highly on the list of things to do.

Yet attending to making a valid will taking into account changed or soon to be changed circumstances is important.  If not, the rules of intestacy would apply on death, and these may not produce the desired outcome.

Wills and succession legislation in the Australian States and Territories contain provisions which revoke any existing will of a person when they marry.  It makes no difference what a person may have written in their will.

This general legal rule cancels any prior will upon the will maker’s nuptials.  However, there are exceptions and these can vary in extent from one state to another.

What the legislation says

Must be a valid marriage

For a marriage to cancel a previously made will, it must be valid in accordance with the law, see the Marriage Act 1961 (Cth) which applies to all states and territories.  Section 88D of the Marriage Act 1961 contains provisions on the validity of marriages; the circumstances, consents, age, when and where solemnised.

In Queensland and the ACT, entering into a civil partnership, and/or a civil union (ACT), as defined in those jurisdictions also has the effect of revoking a pre-existing will.  Similarly in Tasmania entering into a registered Deed of Relationship revokes the terms of a prior will.  Again, similar exceptions can apply to these relationships as for marriage but the situation varies among the jurisdictions.

As mentioned above respective state laws provide exceptions to the cancelling effect of marriage on an existing will or parts of it, depending on the circumstances. It is important to note that these exceptions vary across the states and territories.  Exceptions generally concern:

Minors making a will

Under Australian succession law any will made by a minor (under 18s) is usually invalid.  However, there is an exception where minors may make a will in contemplation of a particular marriage to a named person, and this should not invalidate the will provided that the wedding takes place.  If the nuptials are not solemnised, the will is of no effect.

Since marriage affects the legality of existing wills, through the operation of law and independent of the will maker’s intention, it is important to make a new will.  Circumstances vary and with the different exceptions, legal advice from a solicitor should be obtained.

A Civil Partnership is a legal relationship between two adults, regardless of gender.


Important notice: This article is intended for general interest and information only. It is not legal advice and nor should it be used as such. Always consult a legal practitioner for specialist advice specific to your needs and circumstances and rely on that.© BHS Legal