Skip to content
You are here: >> WillsHub-BHS Legal Home >> Articles on succession and inheritance law in Australia >> issue and children

For more on this topic see: ‘‘My issue” – considering the meaning of issue in wills’

“Issue children” was used to describe a class of beneficiaries in a will.  But it wasn’t clear what was intended and ultimately required resolution by the Court.   We make a will so as to provide for our loved ones; to be able to choose who will inherit our property.  But writing down our intentions so that they are clear and unambiguous for others when we are no longer around, is not easy.   For example the words “issue” and “children”. The word “issue” is a legal term meaning all of a person’s descendants; not just their children.  More considerations on its meaning can be read here.

In a recent case a gift in remainder of real estate under a will had to be distributed.1 The will-maker had died in 1948. The two trustees of the estate were the surviving children of the will-maker’s only son, deceased.  Their sister had pre-deceased their father, leaving children of her own.

The problem was that certain features in the drafting of the will, made it unclear as to what the will-maker had intended by using the expression “issue children” and “issue children or grand-children” in his will.  As a result the trustees formed different opinions as to how the real estate in remainder should be distributed.  The matter was brought before the Court to resolve.

The Court noted construction of the will was necessary. A large body of legal rules  in succession and wills legislation and legal principles established by the general law apply to the construction of wills.2  The court has wide discretionary powers in discerning a deceased’s intention and interpreting their words in a will.  This includes the use of external evidence, this example from s32 of the Succession Act 2006 (NSW) but other jurisdictions have similar.

In this case the Court said, the question of construction was primarily focused upon the words “issue children” used in relation to the will-maker’s son, (and father of the trustees).  The question was whether the gift was to be shared equally or whether it should be shared in thirds, taking into account the offspring of the deceased sister.

The usual meaning of “issue”, the Court said, extends to all descendants or progeny”, see the High Court case of Matthews v Williams [1941] HCA 32.

In this case the High Court of Australia said that:

“’Issue’ is a word with a clear prima-facie legal meaning. It means descendants or progeny. No doubt ‘issue’ is a flexible word and its prima-facie application may be restricted by any sufficient indications appearing in the documents…” (at 650)

The legal meaning of the term “issue” as shown in the graphic below refers to all of a person’s descendants, not only their children. 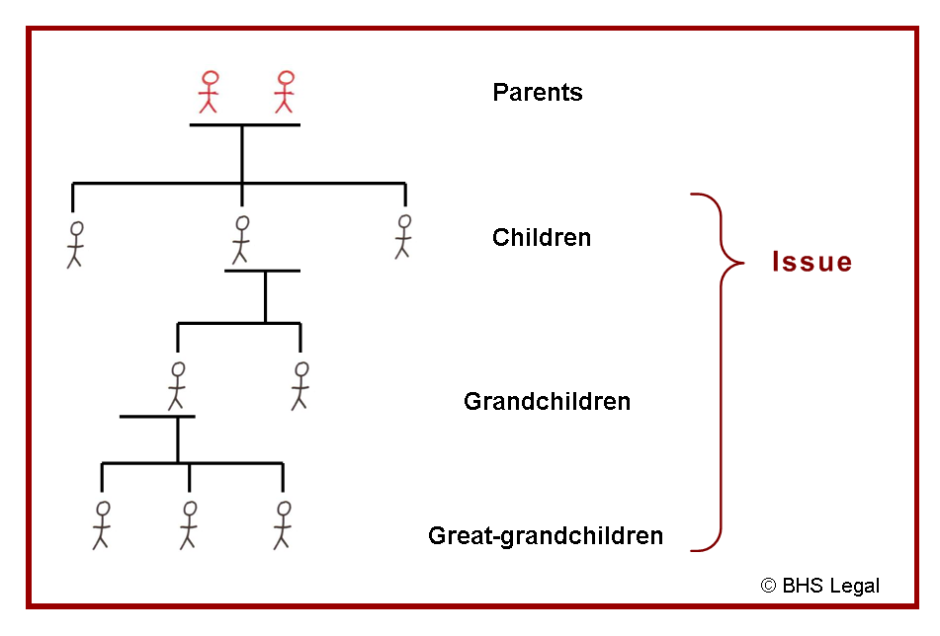 But it has to be kept in mind that this meaning of “issue” given by the law in first instance can be bent or influenced somewhat in a person’s will by their choice of words, what else is said in the will in their particular circumstances.  Read more on this here.

The Judge said he agreed that the expression “issue children” conveyed an intention to narrow the usual meaning of “issue”, so that the only descendants falling within its meaning were the children of the will-maker’s son.

The Court declared that the gift of real estate in remainder was to be shared equally between the two children of the will-maker’s son.  The children were also the trustees.

What does this mean for will-making?

If at all possible try to make plain, even by name, who is to benefit from a gift, rather than use expressions that give rise to the inference that the gift is to be divided across a class or group of potential offspring. Unless of course that is the intention, seek legal advice.

1. Edmonds v Morrissey [2016] NSWSC 342
2. The principles of construction of a will were summarised in this case as follows:

“The general principles applicable to the construction of wills may be summarised, for the purposes of this case, as follows. The Court must construe the language of the instrument, read as a whole, in order to determine the testator’s intention. The words of a will are given their usual or ordinary grammatical meaning, unless the context indicates to the contrary, or the ordinary meaning lacks sense. In some instances, it may be clear that words have been employed in error and that other words must have been intended. If that is so, the will is read as if it contained such words instead (see, for example, In re Dayrell; Hastie v Dayrell [1904] 2 Ch 496; Tatham v Huxtable [1950] HCA 56; (1950) 81 CLR 639 at 645 and 651; Aboud v Aboud [1960] NSWR 498).” (At 14).