Please note: if you have landed here looking to contact the Court please see the Court Sitting Locations of the SA Courts Administration Authority here for information.

The Clare Courthouse building was constructed in 1878 and occupied in 1880.  It has been in continuous use since that time although there have renovations and additions.

The first Courthouse and police station in Clare was built in 1850 and is located outside the town centre.  It has been classified by the National Trust and is now used as a museum.

Use of the Clare Courthouse in 1854 – no facilities for the police
The Clare Courthouse building “has been devoted, in whole or in part to the use of the police for a mess-room, a circumstance which appears to have given some umbrage to the Magistrates and the District Council.” :  the South Australian Register, April 1854. 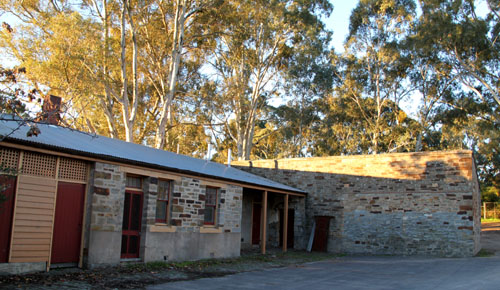 The ceremony of laying the foundation stone was performed in 1863 by the owner of the quarry who allowed the use of his quarry for the quoins of the building, which “are of a beautiful white sandstone.” The South Australian Weekly Chronicle, February 1863

The usual preparations having been made, Mr Hope proceeded first to deposit a bottle in a cavity prepared for the purpose, containing two of the newspapers of the province, and a parchment scroll beautifully engrossed by the ..postmaster, together with a silver coin of the period.

Inscribed on the stone was, among other words:

May justice, impartial decision, and the laws of our country be ever faithfully administered herein. God save the Queen!

Clare courthouse as a polling station:

The Legislative Council Elections,  April 1881, from the Northern Argus:

At 8 o’clock on Wednesday morning the door of the Clare Courthouse was thrown open for the day, that building being converted into a voting place. 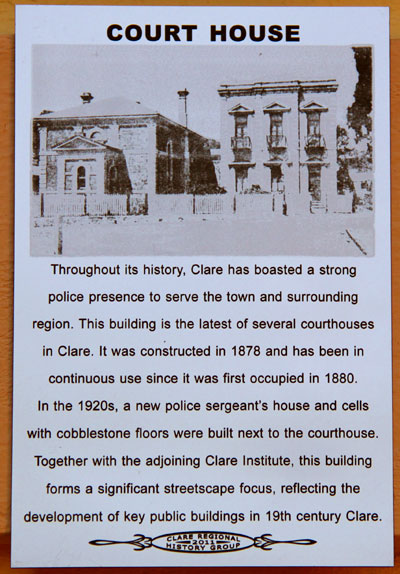 Reporting under ‘Miscellaneous” the correspondent from the Northern Argus, October 1890 wrote:

It is about time that the Government got the ceiling of the Clare Courthouse patched up.

A snippet from “Northern Jottings” by an “Idler” in 1878 to the Northern Argus:

I looked in the Clare Courthouse during the sitting of the Licensing Bench, and was surprised to hear from the lips of the Inspector of Police that there was a deal of sly grog-selling in the North. That information was elicited while he was opposing the granting of a wine license. …Selling grog on the quiet should be stamped out..” 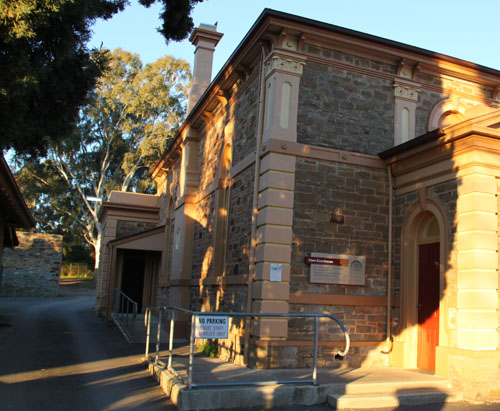