Please note: if you have landed here looking for contact information of the Cairns Magistrates, District or Supreme Court, please go to the Contacts page for All Courthouses here.

The 1919 courthouse building
Following World War 1, construction commenced in 1919 taking almost three years to complete.  At the time the building was hailed as rendering  “an imposing effect most restful and pleasing to the eye.  It has harmonious and beauteous surroundings, and is a distinct acquisition to the town.”1

Local timber was sourced from the Cairns Hinterland for the courthouse. The construction gave employment to returned World War 1 servicemen, as part of a post-war program instituted by the Queensland State Government.  Remodelling and extensions in 1968 added a second court room and magistrate’s court.

The 1919 Courthouse was not the first courthouse in Cairns, but was a long overdue replacement for existing and inadequate facilities, as the following historical snapshots show.

Settlement in the Cairns area began when gold was discovered in the Hodgkinson River in the 1870s.  The township of Cairns was established in 1876 to service growing needs.  To provide a place for the administration of the law, a ‘temporary’ timber structure was erected.  In 1878 two new courts were built.2

In 1884 a more substantial timber courthouse was constructed but by the end of the 1880s boom decade, that too soon became inadequate.  However, in the face of an economic downturn in the 1890s, recurring renovations were all that could be done to improve things.   It was to be many years, decades in fact, before a completely new building was constructed.

In 1907 the Morning Post reported4 that His Honor Mr Justice Chubb referred to the insufficient accommodation in the Cairns Courthouse.

“This is certainly the worst courthouse on the circuit,” he said. Quoting the Chief Justice who said the accommodation was “miserable and the surroundings contemptible”.  The Judge asserted that the courthouse was “a disgrace to a progressive town like Cairns.”

In 1907, the Minister for Public Works approved funds for additions etc to the Cairns courthouse: the Morning Post, 29 March 1907, but again these were ‘temporary’.

Even the Courthouse clock was not without its problems, as one juror found to his detriment:6

Yesterday jurors not empanelled were excused in the morning for almost an hour and a half, and when that had expired the names were called over at the commencement of another case. One juryman failed to answer his name and was fined £2. A couple of minutes [later] the juryman in question came into court and explained that the court clock did not correspond with his watch and apologised for his lateness. His Honour, remitted the fine, and remarked that the clock on the wall was wrong. He wished it would be put right. In the afternoon that timepiece, benefitting from the judicial admonition, kept Greenwich standard throughout.

In 1911 the shortcomings of the existing Courthouse facilities were the cause of much complaint following sittings of the District Court.3

“The atmosphere inside the Court during the morning was fearful; the sea breeze could not find ingress, and His Honour, members of the Bar, officials, and reporters sat in an environment [in]ferno, caused by crass short-sighted[ness] that was reminiscent of Dante’s Inferno…”

The cramped conditions and lack of ventilation continued. In 1914, ‘many complaints from jurymen’ were reported as to the unsuitable nature of the Cairns Courthouse, and the ‘shocking heat which prevailed inside the building.

“What sort of a courthouse do you call this?” was the remark by one. The acting judge, in sympathy for the difficulties endured by members of the jury deliberating in a small room without proper ventilation, temporarily put aside their names from serving on the next case.5

In the early Federation years, complaints about the lack of proper court facilities, the lack of ventilation, cramped conditions and so on led to depositions being made by the Cairns Chamber of Commerce to the State Government for a new courthouse.  After many years and in 1917, the Government Architect of the Queensland Department of Public Works commenced work on a new building.

From a “Disgraceful Courthouse”1 to ‘a graceful and imposing structure’.2

In 1919 the Northern Herald reported that the new Cairns Courthouse

“..is at last under construction, and the building promises to be a graceful, imposing structure, fully in keeping with the size, dignity and importance of the town and district.”1

“Evil-doers will be pleased to learn that there is a good strong room at the rear..”1

But the voices of the past were heard:

Ventilation will be a feature, natural light will be furnished from glass doors and French casements.”1 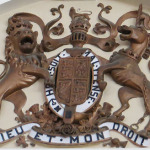