The former Bungendore Courthouse building in Gibralter Street, Bungendore, is no longer  used as a courthouse but as Police Station. Constructed of sandstone it is surrounded and framed by beautiful mature trees.

Bungendore is a small town not far from Canberra in an easterly direction and part of the Queanbeyan area of New South Wales.  See location map below. 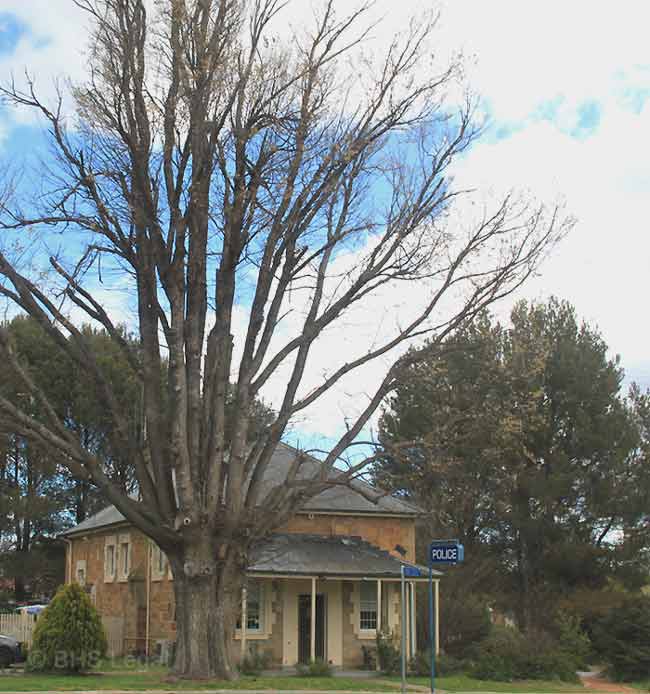 The Courthouse building (now occupied by the Police) is constructed of sandstone, likely hewn locally.  Internal fixtures and fittings were originally Australian red cedar (Toona australis), such as the dock, benches and bar table.  The last of these were removed in 1979 when the internal space was refurbished for use as a police station.1

In 1847 the Legislative Council allocated a sum of money for the building of a watch house at Bungendore.2  However it was to be many years before facilities for the administration of justice were  considered necessary.

A question was raised in the Legislative Assembly in 1860 as to what arrangements had been made for additional appropriation for the erection of a courthouse and station house at Bungendore, among other localities. And how many ordinary constables were to be permanently stationed there, included lock-up keepers. No information had been received regarding Bungendore. 3

Getting there
Cited among the most important works for the administration of justice being carried on by the Colonial Architect in 1861, was the Bungendore Courthouse.4

Judicial power
The history behind the development of Local Courts in New South Wales can be read here. As explained there, two justices sitting together had wide powers given to them under the Act: Offenders Punishment and Justices Summary Jurisdiction Act (Act 3 William IV C. 3). They could

..”convict people on charges of theft, drunkenness, disobedience of orders, neglect of or running away from work, abusive language to his or her master or other disorderly or dishonest conduct.”

The Bungendore Courthouse sat as a Licensing Court from time to time so as grant auctioneer licenses to applicants, as for example in 1922. 6 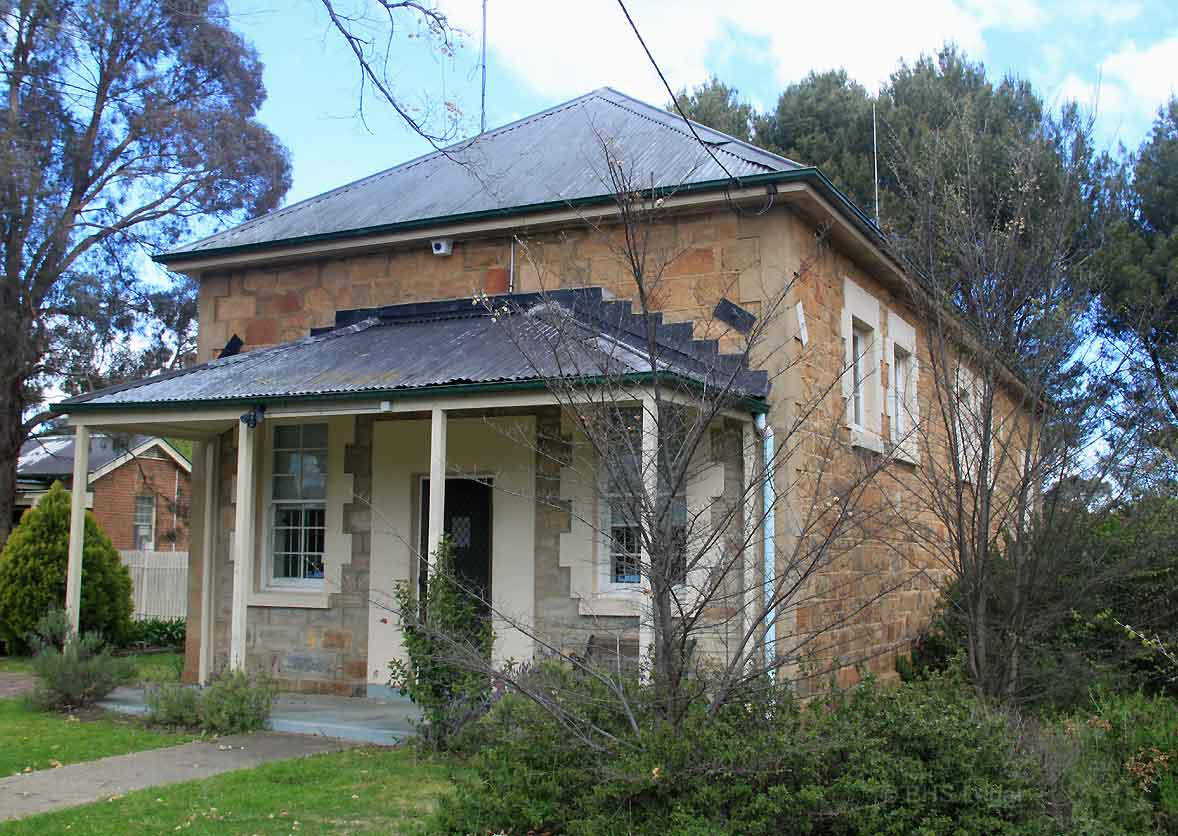 The former Bungendore Courthouse constructed in 1864 and now used as a police station.

Examples of cases
A sample of typical cases reported as being heard before Messrs J Bourke and F Rutledge in the Bungendore Courthouse were reported in 1878.7

From 1895 the Bungendore Courthouse was also used for mining administration. As with other areas of New South Wales, the discovery of gold lured many and such activities needed to be regulated under the Mining Act 1874 No. 8a, An Act to make better provision for the regulation of mining, as it was amended from time to time. Potential miners were required to apply for permission to enter land and search for minerals, not only gold.  In addition, mining companies were regulated as to how they employed miners, and whether or not they were meeting their obligations. More information on the Mining Warden’s Courts in regional New South Wales can be found on the State Archives and Records site.

1878
Colonial Australian courthouse buildings were used for a variety of purposes, in addition to the administration of justice, out of necessity for want of an alternative venue.  In late summer of 1878, and by all accounts an unusually wet one, it was reported that a Professor Scott, the “King of Pain’, had paid a visit to Bungendore and delivered his herbal lecture in the courthouse.  Not many attended however, this being blamed on the weather.8

A ball in the Bungendore Courthouse in 1880

It might seem unthinkable today, but in 1880, the magistrates consented to the use of the Courthouse for holding a ball, in this case the Oddfellow’s Ball, Oddfellows being the Independent Order of Odd Fellows (IOOF).9

Courthouse gardens in 1881 – improved by the local constabulary

It seemed that Senior Constable F. Nelson, the local constable at the time, was rather garden-minded. It was reported that he had received a ‘splendid assortment of ornamental trees and shrubs from the botanical gardens, Sydney’, and had been planting them around the Courthouse. His efforts did not go unnoticed, the correspondent saying further that since his arrival,  ‘..a decided improvement is visible in the Courthouse and its surroundings, he having beautified the grounds by plots of flowers, etc, and provided many necessaries which were much required.’10 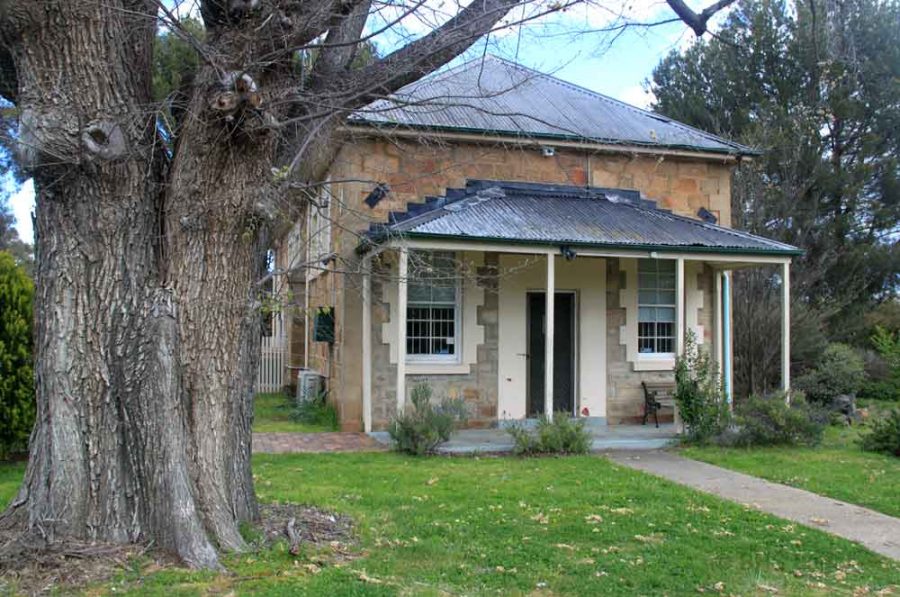 Public alcohol and drug education in the Courthouse

In 1863 a lecture was given in the Courthouse in connection with the local Total Abstinence Society.  The lecture subject was  “On certain Narcotics and Stimulants, their legitimate uses, and national abuses.”.

Excellent attendance was reported and, curiously ‘an unusually large proportion of ladies’. The correspondent noted that the lecture was well received and listened to with ‘unabated interest’. Further observations were made by the Reverend at the end.11

Bungendore Courthouse as a polling booth in 1899

The Bungendore Courthouse was used as a polling booth midweek in 1899.12  Meanwhile, opposite it was reported that a ‘good day of sport’ took place, consisting of bicycle races and a football match.

1893
In the autumn of 1893 it was observed that the “..the courthouse and police buildings have been thoroughly done up and now quite an ornament to that portion of the town.”13 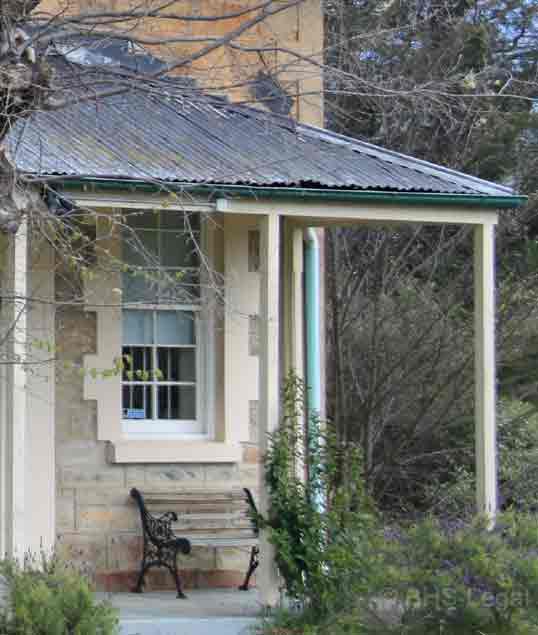