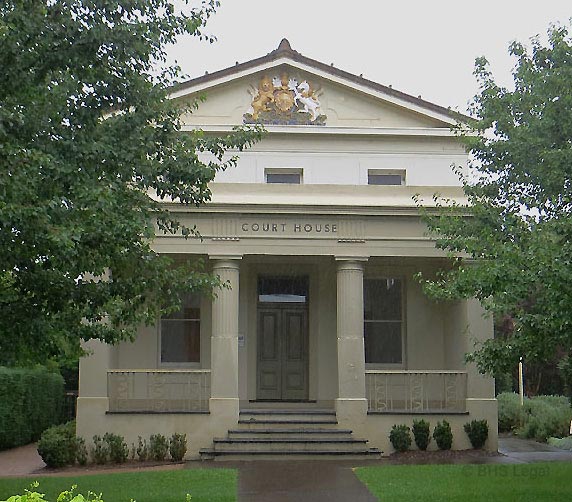 The Courthouse was designed by the colonial government architect James Barnet.  (Detailed information about him can be found on the Australian Dictionary of Biography site here.)

Built in the years 1890-91 the Berry Courthouse in Victoria Street, Berry, location map below, has been classified as being Greek Revival in style and Classical Academic.

Notwithstanding the foregoing, the following are some interesting and random snippets.

As always with the construction of a new public building there was a long process before work began including design work and tendering for builders.  That a new courthouse was to be erected at Berry was reported around the same time as the tender process was under way.1

Tenders for constructing the courthouse were submitted to the Tender Board of the Government.  Ten tenders were received, the lowest  being from A & P Ettingshausen for the amount of £1593 and10 shillings.2  In the same month it was reported that the new courthouse would soon be started, the site considered to be ‘..a good one, and near the new agricultural show building.’3

1891
One year later, in 1891, it was reported that ‘good progress’ had been made with the courthouse building,4 but not everyone was happy.

‘A growl from Berry’
The extent of facilities, or rather the lack of them, seemed to attract some criticism.

“The fact that there is no constable’s residence attached or near the new courthouse is causing some grumbling.

The distance between the cells and the new courthouse is nearly three quarters of a mile, and prisoners will have to be taken there and back.

It will be another illustration of the fox, the geese and the corn over again. Possibly, the Government are going to supply a prison van, and by this means remedy the difficulty. It will certainly be a novelty.”5

1892 – Opening of the Berry Courthouse

The Courthouse was finally opened on 5 February 1892, with the hearing of several cases.  The Presiding Magistrate (PM) Mr Nesbitt congratulated the ‘..inhabitants (of Berry) on the handsome building.’6

Other Australian courthouses from the Colonial era and early 1900s can be viewed in the Courthouse Gallery of old Australian Courthouses here, a work in progress, or with more background here.