The historic Auburn Courthouse in South Australia lies in Auburn, a small town in the Clare Valley agricultural and wine growing region of the mid north of South Australia, see location map below.

In the 1850s copper was discovered further north at Burra.  Being half-way, Auburn became an important resting place for both miners and bullock drays transporting copper from the Burra mines to Port Wakefield on the coast at Gulf St Vincent. 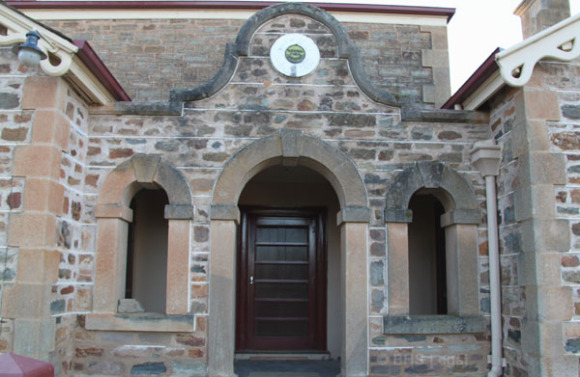 A petition to the Parliament

In December 1858 Mr Peake from the District Council of Upper Wakefield, presented a petition to the South Australian Legislative Council, praying for the erection of a Court House and Police Station at Auburn.  Parliament resolved that a Court-house and police-station were much wanted at Auburn, it being the centre of a ‘very large population’.  It was ‘very desirable that Government should have some recognised design for such buildings…’.  Generally the cost of court buildings were reported to vary from £200-£800.  In 1860 the Auburn Courthouse and Police Station were completed at a cost of £850.  Extensions were added later. 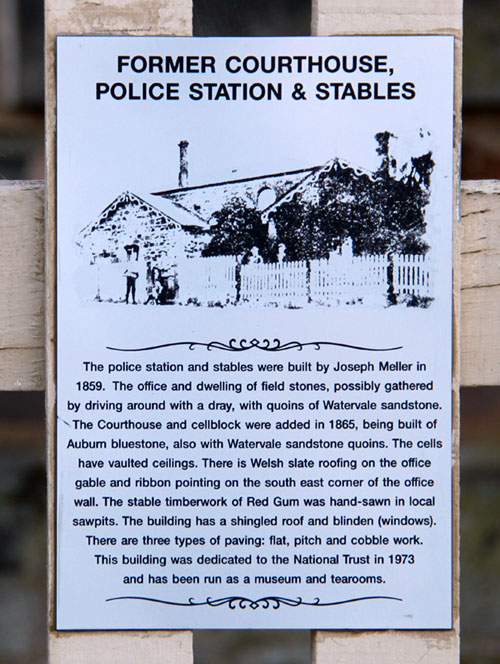 A variety of stone, blue stone and sandstone used in the construction was sourced locally.  Hand sawn river redgum (Eucalyptus camaldulensis) for the timber and a combination of flat slate paving, pitch paving and cobble work.  Joseph Mellor was a local builder and an accomplished stone mason, constructing many of the early buildings in the area.  The building is listed on the National Trust Register, see the plaque above.

Another courthouse to the north of Auburn is the Clare Courthouse in Clare, click here, in the mid-north of South Australia. The Clare Valley is an important wine growing region further north of the Barossa Valley. 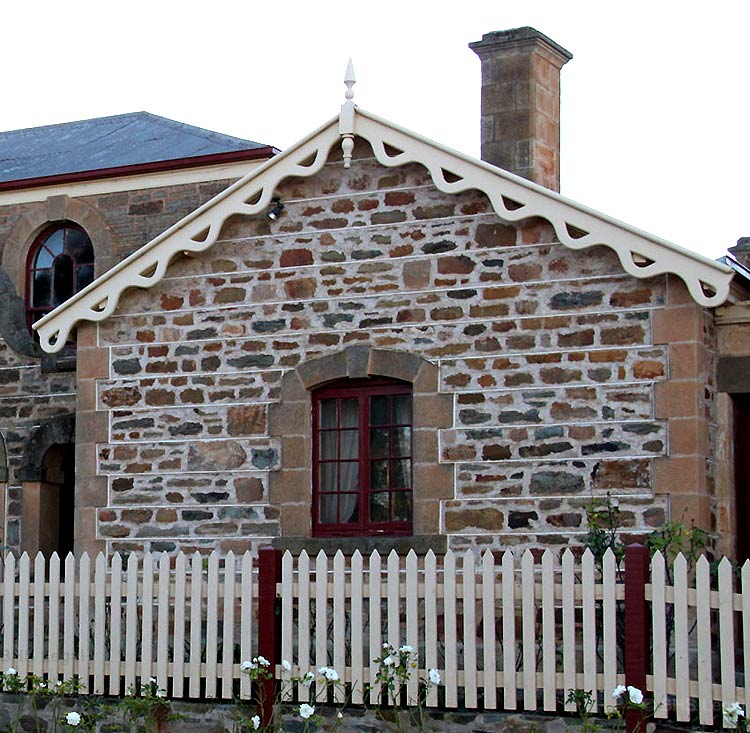 An intestacy (no will) case originating in Auburn – 1873

In 1873 the wife of a farmer from Auburn died leaving seven children: Revitt  v Keelan 1873, 7 SALR 28.  She had four children by him and two from a previous marriage, all surviving.  Keelan, one of the defendants was the mother-in-law.

Some years earlier the husband had conveyed some land on trust to the defendants, for the benefit of the wife who had a power of appointment under the trust.  She was entitled to exercise that power under any deed including a will.  However she had not made a will, dying intestate and had not exercised the power of appointment.

The husband obtained letters of administration of her personal estate and was her sole personal representative.  He claimed that, under legislation known as the Inheritance Amendment Act 1867, of the South Australian Parliament, and as personal representative of his wife’s estate, he was entitled to the land, but if not, he was entitled to an estate for life as tenant by curtesy.

Curtesy is a legal term referring to the right of husband to a life estate in the whole of the land of his wife after her death, (Butterworths Australian Legal Dictonary, 3rd ed, P Butt).

Applying the law to the circumstances presented a number of difficulties to the court.  The judge said that “I feel great difficulty in the task imposed upon me of putting a construction upon an Act of Parliament so vague, lax, and uncertain as is” [the above Act].  Furthermore, he said that the Act was “popularly supposed to have universally abolished primogeniture in South Australia”, and concluded that it “does not apply to the real estates of married women dying during coverture, whether the estate is settled to their separate use or not. ”  Such real estate passes to the wife’s heir at law, subject to the husband’s life interest therein by the curtesy.  “Coverture“ is another old legal term where a wife is under her husband’s protection.

In 1878 a horse belonging to Mr Swinden (the plaintiff) was impounded in the public pound at Saddleworth, near Auburn.  The Poundkeeper sold the horse to a member of the District Council, Mr Charles.  The original owner of the horse wanted it returned, but this was refused.  So he then sought to recover its value by the tort of trover.

What is trover?  Trover is an old legal term and means ‘to find’. Today that term is no longer used. Instead it is known as ‘conversion’, or a ‘trespass to possessions’ or similar phrase. The tort of trover is about the intentional dealing by one person with the possessions of another, in an inconsistent and unlawful way.

The action was first heard in the Local Court at Auburn, and the defendant was successful.  The plaintiff appeal to the Supreme Court.  After hearing arguments over the correct application of the Impounding Act 1858 and other legislation, the Chief Justice concluded that “when the sale is made to a Justice of the Peace, a member of the Corporation, or to a member of the District Council in which the pound is situated, no property passes, and the plaintiff is entitled to maintain trover.”

That is, the original owner of the horse was entitled to recover its value.  The sale by the Poundkeeper did not mean that property in the horse had passed. Being the original owner’s possession it remained with him.   A new trial was ordered: Swinden v Charles (1878) SA Law Rep 24.

The Auburn Courthouse has been listed as the Courthouse and Police Station (former), St Vincent St, Auburn, SA, ID 7320, on the Register of the National Estate, of the Australian Heritage Database, the Australian Government Department of the Environment.

See more historic Australian courthouse buildings here and articles about some of them here.