If you have landed here looking to contact the Albany Magistrates Court you can find those details by clicking here. 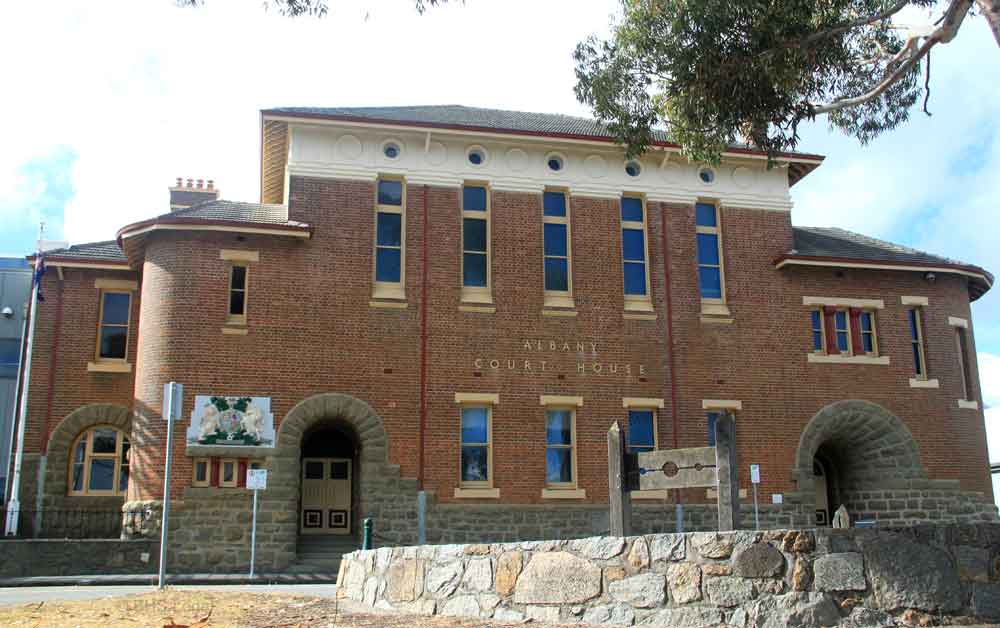 The Albany Courthouse is an operating Magistrates Court for civil and criminal matters in Albany, Western Australia, see location map below.  The Court also has a District Court Registry for civil actions.

Albany began as a penal colony 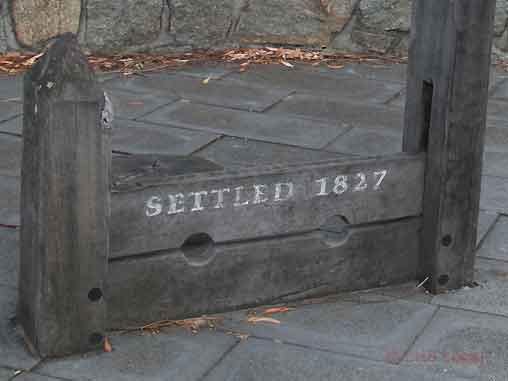 New South Wales were not the only places  established as penal colonies. The stocks situated in front of the Albany Courthouse are a reminder of Albany’s first beginnings as a penal colony.

Albany was founded in 1826-7 in Western Australia when a brig sailing ship, the Amity, carrying a mix of convicts, soldiers among others, landed on the shores of King George’s Sound on Christmas Day 1826.  It was the first settlement in Western Australia, and according to the Albany Historical Society, initially known as Frederickstown.  An excellent historical recount can be found on the West Australian Department of Justice’s page on the history of the Courthouse. 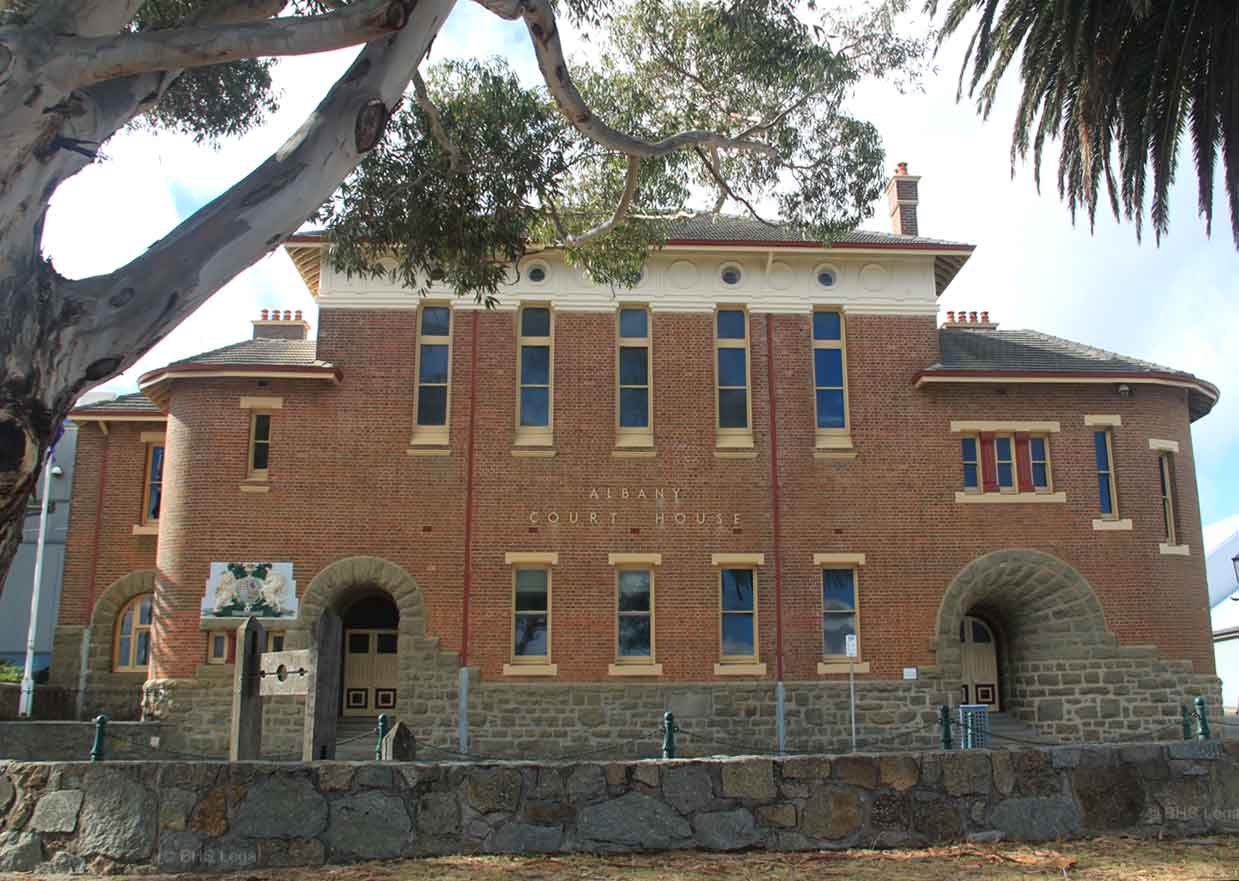 The Albany Courthouse is part of the Justice Complex in Albany and listed on the West Australian State Register of heritage places.  The Albany Police Station was also in the Courthouse building until 1970.1

The current building was designed 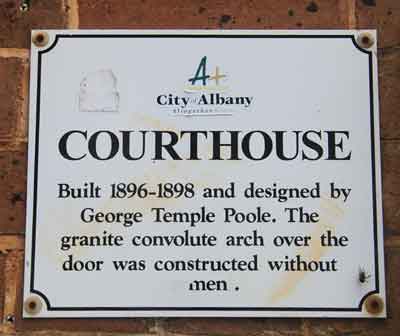 by George Temple Poole and built by a local builder, Charles F. Layton.  The foundation stone for the prospective courthouse was laid by the Director of Public Works, Mr Piesse on 30 December, 1896.2  Details on its construction are explained on the West Australian Department of Justice’s page here.

Opening of the Albany Courthouse – 1898

After a delay due to sourcing the right bricks, the Courthouse was opened two years later on Monday, 7 February 1898.  Opening the Courthouse was the first function of ‘Albany Week’3 by the Attorney-General and Acting Premier.  The latter thought opening a courthouse was ‘hardly right to begin Albany Week but it was still a necessary building..’ and hailed as one of the best in the Colony of Western Australia , of which the people of Albany ‘should be well proud’.

Arched entrances in stone are ‘poems in stone’

A curious feature of the Courthouse building are its arched doorways.  They were constructed from local granite in the ‘dry stone’ style meaning the stone was not cemented together.

Writing about the grace of what he called the two porch-way entrances in 1948, a correspondent recounted that a man who had worked on the building, said the arches were really “poems in stone”.  This was because he doubted whether anyone still existed  who could do such stone masonry.  Then inside, there was a large, lofty cedar-panelled main court room and spiral staircase leading to the exit hall. 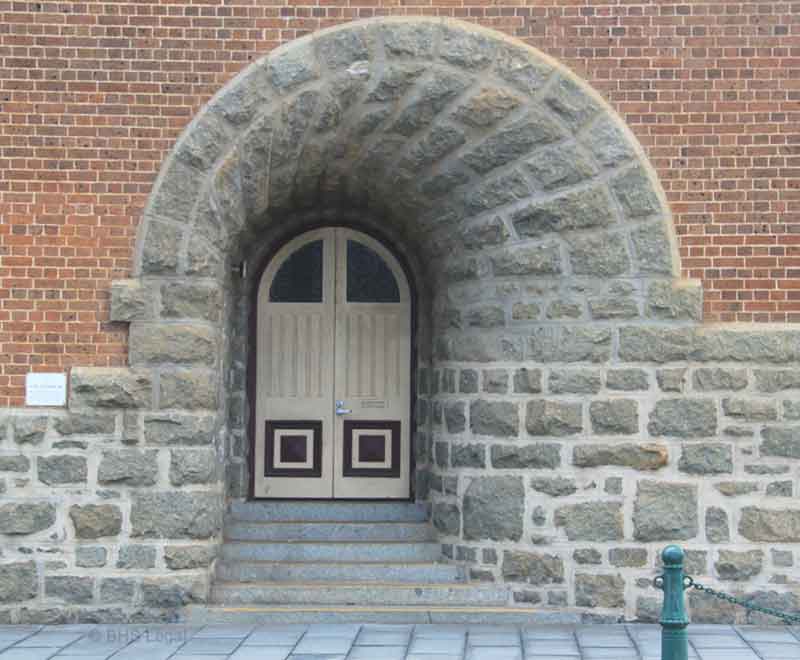 The unusual curved blue stone work around the entry. The stone was quarried locally.

In the 1800s courthouses were used for a variety purposes in addition to being places to administer justice. In 1898, the same year that the Albany Courthouse was opened, and subsequent years for a time, the colonial Government of Western Australia used it to auctioneer residential land. One lot was knocked down at the upset price of £70 to the quartermaster-sergeant at the forts.5

The British Coat of Arms on the Albany Courthouse

The Royal Coat of Arms of the United Kingdom is situated alongside one of the doors to the Courthouse. It has been carved out of sandstone which originated from Sydney.1

The Royal Coat of Arms for the United Kingdom has significance for the development of our legal system because it represents the reception into Australia of English common law.   It is also a reminder that, at least up until 1986, there was a right of appeal from Australian courts to the highest court in the hierarchy, the English Privy Council.  However in 1986 legislation was passed in Australia, the Australia Act 1986 (Cth), and also in England which abolished this right of appeal with the result that the High Court of Australia became the highest court of appeal.

A few notes are interesting to note. The Latin words Dieu et mon droit at the bottom of the shield mean ‘God and my right’, which is the motto of the English monarchs.  The words ‘Honi soit qui mal y pense’ around the shield mean ‘Evil be to him who evil thinks’, from the Most Noble Order of the Garter.  The shield is supported by an English lion on the left and a chained unicorn on the right.  The chain is there because it was thought that unicorns were dangerous.

Side view of the Courthouse looking out towards King George’s Sound, Albany. 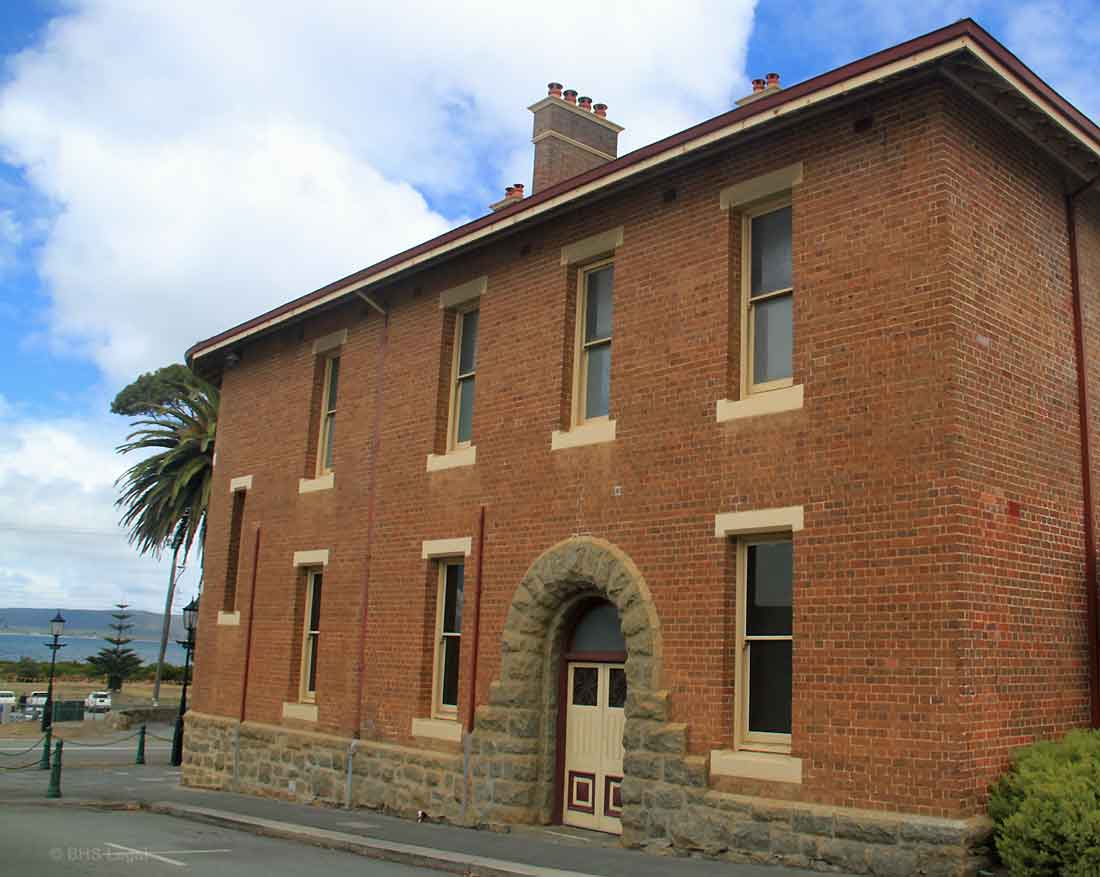 Looking into the colonial case history of the Albany Courthouse reveals many inquests into the cause of fatalities in the area appear to have been held, as part of the Court’s case work.  The Court also sat as a Licensing Court from time to time.

In 1915 a complaint was made by the local council, then the Municipality of Albany, that a resident in the same street as the Courthouse, had allowed a curtained-off portion of a balcony over a public footpath to be enclosed in connection with his photography business without obtaining a license through the proper application process..6 Such an enclosure was against Council by-laws which the Council had the power to make under the Municipal Corporations Act 1906. The dispute was over the meaning of ‘enclosed’.

Initially the magistrate in the Court of Petty Sessions sitting at Albany concluded that no offence had been proved, as no part of the balcony had been completely shut in and confined on all sides.  However the Council appealed with the Chief Justice ruling that from the facts, it appeared that portion of the balcony was enclosed.

In another case in 1917 it was reported that a large crowd attended a hearing at the Albany Courthouse over the fate of two men.  They had been arrested in connection with allegations of theft of registered mail containing money and valuables on the ship Indarra during its voyage from Sydney to Albany. The pair were held on remand for a further period until sentencing.7